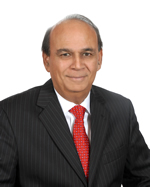 Prior to joining CAM-I in 2005, Ashok G. Vadgama was a Program Manager for Strategic Programs at Motorola Semiconductor Product sector in Austin, Texas.

He has extensive experience in implementing integrated financial and business process modeling systems and driving strategic initiatives in USA, United Kingdom, Europe, Asia and Mexico. He has held various position in finance and operations in multi-national companies in USA and UK.

Previous to that at Motorola Semiconductor Product Sector, he was responsible for driving ABM (Activity Based Management) and process improvements at multiple global locations. He was elected to the Board in May 2004.

Ashok is on the Editorial Advisory Board of “Cost Management” a Warren, Gorham & Lamont of RIA publication.

Srikant serves as Managing Principal, Advisory Services for Cherry Bekaert LLP where he is responsible for delivering value-added advisory and consulting services that address the most pressing and complex challenges faced by clients across commercial and public sector industries.

Previously, he served as Grant Thornton's National Managing Principal of Advisory Services, responsible for the development, coordination, and execution of US Advisory business strategy across industries, commercial, and public sectors. He also served on the firm’s Senior Leadership Team and Global Advisory Steering Committee. Srikant led the hyper growth of Advisory Services by focusing on creating, protecting, and transforming value for clients — creating a full service consultancy and nearly doubling revenues. Prior to that, he led the Global Public Sector for three years, raising its market stature.

Srikant has also served as an Associate Partner at IBM Business Consulting Services and Principal Consultant at PricewaterhouseCoopers LLP. He started his career in the federal government.

Srikant serves on the Foundation Board of Directors for the Wolf Trap National Park for the Performing Arts, and Co-Chaired the 2019 Wolf Trap Ball. He also serves on Indiana University’s O’Neill School of Public & Environmental Affairs (SPEA) Distinguished Alumni Council (Chair 2016-18), and as Board Chairman for the Consortium of Advanced Management-International (CAM-I) – a leading not-for-profit collaborative in cost, process, and performance management. He previously served on IU’s Manufacturing Policy Advisory Board. From 2015-17, Srikant served as Board Chairman of the Partnership Fund at Thomas Jefferson High School for Science & Technology, raising over $4 million for this top-ranked public high school.

George B. Millush is now retired from being the Director of Financial Process Planning for Daimler-Chrysler, a unique position dedicated to process, systems, and organization development in pursuit of achieving Best Practice processes in Finance.

He has been an active member of the CAM-I organization since 1993, including participation in the Target Costing, Process Management, and Value Quest publications. George was the CAM-I CMS Program Chairman for two years, and was presented with the Robert A. Bonsack Award for 1997.

Anthony Pember is a lead for Grant Thornton's Cost and Performance Analytics Service Line. Anthony has a wide range of experience in both the private and public arenas including cost and profitability modeling, model methodology and business rule development, strategic analysis, data analysis, and project management. Anthony has been involved in, and has led, cost management and performance improvement projects for many clients in the United States, Australia, Mexico and Great Britain.

Anthony has experience designing, building, and maintaining cost and predictive models for a number of clients within the Australian Department of Defense, the US Navy, the US Coast Guard, commercial clients, and numerous higher education institutions. Prior to working for Grant Thornton, Anthony was CEO of Pilbara Group, a boutique software and consulting company. Anthony has also spent many years working for multinational pharmaceutical companies, including Bristol Myers Squibb and Schering Plough, where he gained experience in the areas of manufacturing, logistics, marketing, and sales.

Anthony currently serves on the CAM-I Board and is the co-chair of its Environmental Sustainability Interest Group that is currently investigating how methodologies like Activity Based Costing and Target Costing can be applied to the environmental sustainability field. Anthony holds a Bachelor of Science from the Australian National University.